I made a special blog post when we redid the bathroom so I thought it only fair the living room get the same attention. I've been putting this off because there's a lot more I want to do, but I feel like decorating is always a work in progress, so think of this as more of a snapshot in time than a finished product.

This is what our living room looked like when we bought our house.  In one word: fusty. 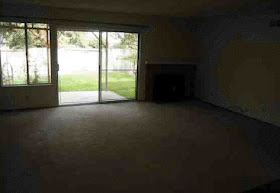 I cheered the place up as best I could, but with no time or budget, the results were mediocre at best. Notice the popcorn ceilings, ugly tv setup and general lack of lighting. 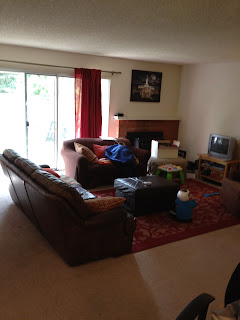 One day, I realized I was spending 90% of my waking hours in a room I couldn't stand. So I asked my dad if he could start sending me some tax work to do during my little guy's naps. After saving up for a few months, I finally had a little budget (yay for budgeting!) to start on Operation Make Living Room Livable.

First project I'd been dying to do since we moved in: Paint the fireplace white!
Before: 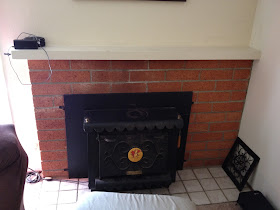 After (tape still covering the fireplace insert that, while ugly, we actually use so it had to stay): 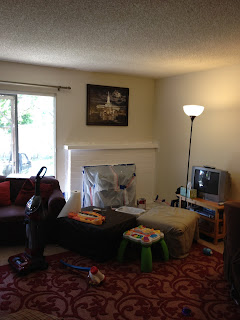 Take a special look at the above ottoman on the right, near the tv. Because that is your next "before" picture. With a little fabric, buttons, nails heads, and extra time while Bryan was out of town for work recruiting, I created this little beauty. It was my first attempt at being crafty in...ever? I left the legs unfinished and even left some of the staples in the legs in homage to Restoration Hardware's Decontructed Shelter Collection. After: 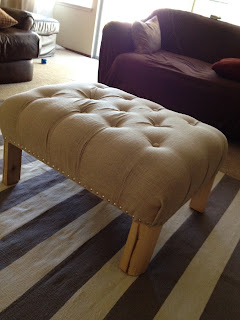 While we were in Sequoia National Park, we paid some people to de-popcorn our ceilings and re-texture (SO worth it), but we opted to paint ourselves. We spent forever covering everything up and painted our ceilings until 2am. Good times, good times. I posted the below picture to Facebook because it reminded me of E.T. I've never seen the tv show Dexter, but I was told it looked like a scene straight from that show.  That was soon followed by painting the walls a lovely Stonington Gray (special thanks for my friend Rachel for doing all the legwork and then letting me steal her living room wall color). We then installed 12 canned lights in the ceiling. Special shout-out to Paul and Amy for being our lighting consultants. 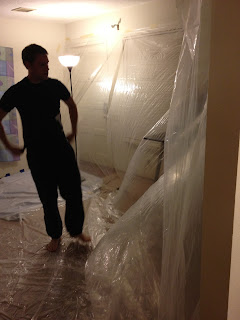 Ceilings and walls Before (This and a tiny square entrace light were our ONLY lights): 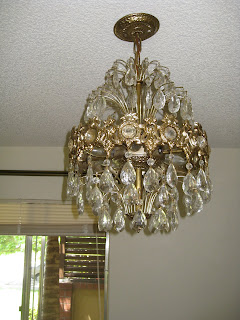 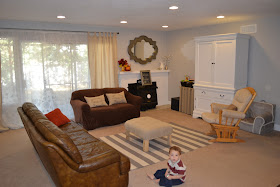 We don't use our TV much, so I was all too thrilled to cover it up with an armoire. One Craigslist search and $80 later and we were in business with a solid wood armoire, ready for paint. It looked great before and I sensed some people were aghast that I was painting it, but I was desperate to lighten this place up. So painted it, we did. And bonus! The bottom stores my toddler's bigger toys and he can get them out himself. The little bookshelf to the left of the armoire holds the rest of his toys. I made a little curtain out of the same fabric as the ottoman to make it a little less cluttered-looking.

I know some of you mid-century lovers will be aghast that I covered up some "classy" elements, but I couldn't help myself. 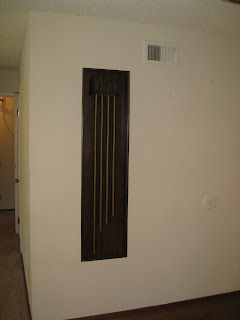 Doorbell After (Don't worry--the chimes are still under the mirror and still play the doorbell song). 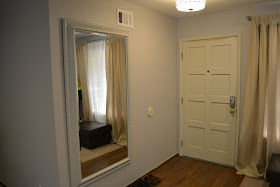 Mantel treasures. It will rotate with the season, but here are some of the basic elements 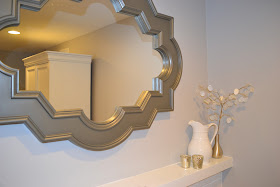 View from the other side of the room. I probably should have moved the shoes--but hey, that's how we live. And no matter how pretty I wanted it to be, it is still a living room and therefore, had to be very livable. 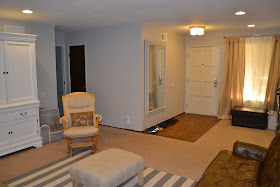 We still have a ways to go with things like baseboards (some walls have them and some don't) and wall decor. Those will come with time. But overall I think we did pretty well. The only new furniture we bought was the $80 armoire. Everything else was either refurbished or moved from another part of the house. The majority of the money was spent on de-popcorning, lighting fixtures, and paint. We went pretty cheap on curtains (go IKEA), and a few accessories (TJ Maxx Home Goods--I am obsessed). Thanks to hubby for helping me out with painting, lighting, baseboards, etc. Don't know what I'd do without him.

Fav Shopping Spot - Where do you like to buy your home decor items?

When you decorate, do you worry about things going out of style or do you throw caution to the wind and keep it as "trendy" as you can?
Lisa
Share