Being My Own Consumer Advocate: How Allegiant, Hobby Lobby, and Target Responded

Don't forget to enter our holiday giveaway on this post (Ends end of day TODAY!)

I'm from a family of six kids. We're all different, but one thing we have in common is our easy-going, non-confrontational personalities. I can't speak for my siblings, but that has sometimes translated into me being a total doormat, afraid to "rock the boat" or ask for anything. I fell into that category for most of my life until two things happened: (1) I went to business school and (2) I became a stay-at-home mom. Both of these made me realize that being assertive is not only a good thing, but sometimes necessary. It's up to me to be my own (and my kids') advocate when it comes to health, safety, and (especially applicable to this blog) my... consumerism. Weird thing to be an advocate about, I know. But when you're a stay-at-home mom living on a budget, it's up to you to make sure you get what you pay for.

First of all, let me clarify, I'm not talking about being a total jerk and/or verbally assaulting retail clerks who are just trying to do their job. Anyone who's ever worked directly with customers can tell you acting like a jerk isn't going to get you nearly as far as being respectful and kind. Even if it did, who wants to live their life yelling at people to get what they want? Not me.

Here are a few examples of how I've taken a stand (without being a jerk):

Company-bashing is not the intention of this post, so suffice it to say I had a pretty terrible flight experience that involved me chasing a toddler around an airport terminal for eight hours straight. Did I mention I was ginormously pregnant? By the time we made it to our destination, I was exhausted and my toddler was on his last diaper (it was supposed to be a 1.5 hour direct flight so I had prepared for a few hours of delays, not an entire day). We literally could have driven the 800+ mile journey faster than we flew it.
Most of the other passengers (including me) took their ranting to Facebook. Luckily one of the other moms I met took a more productive route and called Allegiant (I later did the same).

My son and I were each given $50 of credit for future flights. Not great, but better than nothing (especially considering how little I paid for my original flight).

When I was making my DIY Headboard, I bought hundreds of decorative tacks from Hobby Lobby. There were a few broken tacks among the bunch. Not a big deal, I thought . . . until I got near the end of my nailing and realized I was exactly two tacks short of finishing. If Hobby Lobby was down the street, I would've run and bought another package, but there aren't any Hobby Lobbys in my city (sad, I know), so I had ordered these online. Ordering a $2 pack of tacks would have cost me $8 because of shipping costs. Not a lot in the grand scheme of things, but I couldn't help thinking that if some of the products hadn't come damaged in the first place, I would have had enough. So I contacted customer service online.

They quickly sent me a new package of tacks, free of charge (including shipping). It was a one-time courtesy, but hey, that's all I needed. I wasn't trying to score free stuff just for kicks, I was just trying to get my damaged product replaced.

I love Target. I am a loyal red card holder. But sometimes my nearby Target drives me nuts. I know low inventory is their business model, but sometimes their stock is so low, I want to scream because half the things on my list are out of stock. One particular day, I ran to Target with my toddler and my newborn because I desperately needed new pacifiers (and wanted a specific brand that I knew Target carried). This is what I found: 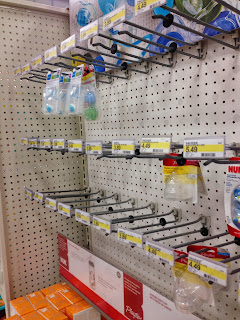 Grr...that was the final straw. I e-mailed that store's operations management and told them about my frequent experiences with stock-outs, specifically in the baby section and could they please do something about it?

I received a canned e-mail response, but I went back to Target the other day to check how their baby section looked. Here's what I found:
What are the odds this was just a coincidence? Pretty good, actually. I can't say if my e-mail made a difference but it certainly didn't hurt. One philosophy I'm trying to live by is, If I can't do anything about it, I don't worry about it. If I can doing something about it, what am I waiting for?

I want to hear about your experiences with being your own consumer advocate? My friend Holly wrote a polite, but pointed e-mail to the manager of a McDonald's location about their slow service and repeatedly incorrect order fulfillment. She didn't receive a response back, so she sent it again, saying she'd be taking her business elsewhere. What do you know? She received a kind and apologetic response (with vouchers). Like I said, it's not about being a jerk and trying to get free stuff. It's about giving the feedback that companies so frequently ask for, "How was your experience today?"

Anyone out there have stories? What stores have you found responsive and willing to make restitution?