How to Cheaply Decorate a Kid's Room When You're Renting

I'll be honest- it is pretty hard for me to get motivated about decorating because we are (A) renting and (B) still in a phase of life where we seem to be moving every two years. Consequently, I tend to decorate in cheap ways that leave us with few holes in the wall to fill when we move out. (If you really want to decorate, like Lisa, check out this post.) 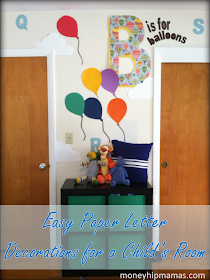 1. I picked up some of those large decorative papers from Paper Source and cut them into the first letter of whatever they were depicting (i.e., "S" is for superhero, which I later realized also had aliens and monsters on it- if C gets nightmares, I guess I have only myself to blame).
Lettering like this is ideal for nursery rooms too. Financially preparing for kids can be difficult, but not if you budget and use ideas like this. 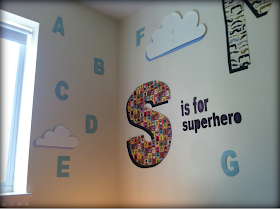 2. I grabbed some rolls of plain black and navy wrapping paper and traced and cut out a duplicate of the letter for a shadow effect.

3. I printed the text in thick black letters for  "is for <insert word here>" on card stock and cut out the letters. I did this for each of my five big letters. Yes, this is the one time in my life I've coveted one of these bad boys.

4. I bought some colored paper and printed out the alphabet and numbers one through ten using the outline style in word art. I also flipped them so they were backwards so the outline would be on the reverse side after cutting.

5. I made billions of those little "tape doughnuts" out of masking tape and painters tape and hung everything up. Depending on the tape you use, the paint on the walls, and how long you leave them up there, you may need to be prepared to clean off some residue when you take them down.

6. I wanted to put a rug on the floor, but wasn't interested in spending hundreds of dollars. Enter the IKEA play mat solution. I bought four of these cheap, fun mats and duct taped them together on the back side. For under $60 that gives you a large floor covering and play area in one. C has tried pulling them apart one or two times, but has mostly left them alone. We bought one first, and noticed when we went back to get the next three they had switched from round corners to square corners, which makes this work even better (no gap in the middle where they come together).

There you have it. A fun, cheap decorating solution for a kid's room in a rental.

Tell us -- How do you decorate when you're in a temporary living situation?
Lauren {MoneyHipMamas.com}
Share